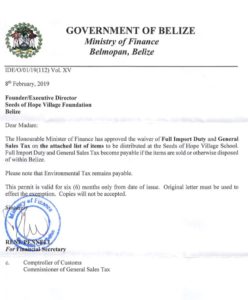 My deepest gratitude to the Ministry of Finance and the Belizean Government for their ongoing support of SHVF’s work in Belize. The Seeds of Hope Village School currently enrolls about 100 students per year. SHVF looks forward to expanding it’s services and partnerships with the Belizean government in the near future. 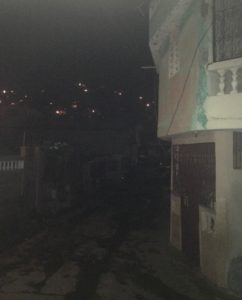 However, my most recent trip in April 2019 was a surreal experience. After landing at Cap-Haitian airport, I picked up my checked bags from the rolling dispenser and headed outside where I was met by one of my team members and a taxi. The driver promptly informed us that the normally $8USD ride home was now $20USD. He then went on to explain that the fare increases were due to the ongoing gas shortage the country has been suffering for the past few months due to the Venezuelan crisis. The repercussions of the shortage were evident by the decreased number of cars and motorcycle taxis on the road. Motorcycle taxis are a cheap form of transportation for both Haitian students and the working class. The decreased transportation options and fare increases had a direct impact on these populations. The on-going gas shortages had also caused sustained, countrywide blackouts for the past few months due to Haiti’s fragile gas-dependent electrical grids. Gas on the black market when found, sold for about $12USD/gallon, too expensive for most people to afford. Finding access to water, charging ports, and affordable food was a daily challenge; additionally, those seeking relief from the stifling heat and humidity with use of AC and fans were left option-less, as I was. The small vendors operating electrical wells for water and gas generators for ice and cold drinks were disproportionately affected by this crisis, as they were unable to make a living.
Despite the difficult conditions, my team and I spent many days preparing for SHVF’s upcoming programs in Port-Margo, a village two hours away from Cap-Haitian. The impact of the gas shortage was felt when we were unable to find fuel for our travels. In addition to this, some of the country’s largest food distributors had empty shelves and warehouses. The high cost of fuel has made it prohibitively expensive for them to buy and resell their usual goods —rice, beans, cornmeal, sugars, flour, oil, etc— at a profitable margin. This fuel crisis exacerbated food insecurity within Haiti’s vulnerable communities. Haiti currently imports the majority of its food and other goods, all purchased in US dollars. SHVF was unable to carry out the normally scheduled programs, we instead provided tuition and transportation assistance to more than 20 students and families. The increased cost of gas and families income losses has resulted in many students being unable to attend school, compounding their already impossible situations. This experience has strengthened my resolve for the work that SHVF is doing in Haiti. This continued crisis has highlighted the precarious nature of day to day life in Haiti for its citizens.
70 Washington Street • Sherborn, MA 01770 • Tel. (508)-655-5833 • jeune@mjjshvf.org
Copyright © Seeds of Hope Village. All rights reserved.